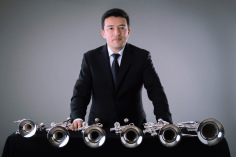 JUAN FERNANDO AVENDAÑO RESTREPO (Bogota, Colombia) is an international soloist and currently principal trumpet of the National Symphony Orchestra of Colombia and professor at the Universidad Nacional de Colombia.

In Colombia he has worked with several symphonic groups, within which it is worth noting the Bogotá Philharmonic Orchestra and the National Symphony Band, among others. He has also integrated and collaborated with: the "YOA" Youth Orchestra of the Americas, the Andean Countries Orchestra "CAF", The World Symphony Orchestra 24/04, Santiago de Chile Philharmonic and London Sinfonia. At the Schagerl Brass Festival in 2014 became part of the "European Brass Ensemble".

For years he has led the trumpet school in Colombia and premiered numerous trumpet and piano works as well as trumpet and orchestra concertos featuring Colombian composers. He also introduced international trumpet repertoire in his country. In 2015 Avendaño released a compact disc with original music for Trumpet and Piano and he is preparing a new one recording in 2021.

Currently, he leads an educational program called “Colombian Trumpet Academy” which associates the trumpet players of his country in order to offer them a complement musical studies.

Juan Avendaño is a Yamaha Artist and member of the World and European Brass Association.