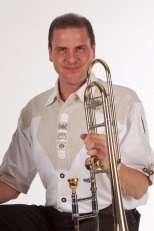 Peter Körner, born in Warendorf, Germany in 1974, started trombone lessons at the age of 16. By age 18, under the tutelage of Oliver Siefert of the Frankfurt RSO, he began his studies in Weimar and later in Munich.

In addition to alto and tenor trombones, Peter is actively performing on the Euphonium and the Bass Trumpet with different orchestras. He performs chamber music as well, appearing with the Brass Quintett Brassmania, the trio Orient Express, as well as his solo work: One Night in the Opera

Diese Seite weiterempfehlen
Copyright: World & European Brass Association, Otto Sauter, the World & European Brass Associations do not take any responsibility for the offers and changes of all partners, concert- and masterclass promoters, festivals etc., nor of any changes, cancellations or mistakes. All partners are responsible and reliable for their own offers. The right to make all changes is reserved.
Login