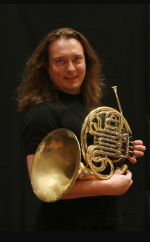 Dariusz Mikulski (Lodz, Poland) is concert and opera conductor, horn soloist, music pedagogue and producer. The internationally renowned Polish musician is appearing in productions all over the world. He studied in Poland, Germany and Austria. He has a bachelor’s degree from the Music Academy of Łódz, also graduated from the Music Academy of Stuttgart and Mozarteum University in Salzburg, where he studied French Horn with Prof. Radovan Vlatkovic and conducting with Prof. Tomas Ungar. In 2003 he received the title of Doctor in Musical Arts in French Horn Performance by the Music Academy of Łódz. He has also graduated from the University of Warsaw, department of Management, concluding his postgraduate studies on Cultural and Artistic Management.

Dariusz Mikulski has won many awards in prestigious music competitions in Poland (Czestochowa, Gdansk and Lodz), as well as in international organisations, such as the "Prague Spring", "Peter-Damm Wettbewerb", "Internationalen Hornwettbewerbs in Toulon" and "Internationalen Instrumentalwettbewerb Markneukirchen".

In May 2015, Dariusz Mikulski was Music Director and Conductor of the World Premiere of the Greek Opera “El Greco”, composed by George Hatzinassios and in October 2016 of Verdi’s Opera “Aida”, in Thessaloniki Megaron Concert Hall.

Dariusz Mikulski offers a wide repertoire, both as a horn soloist and as a conductor, cooperating with notable European orchestras. He has recorded many CDs for several labels, such as ZYX, GENUIN and CONCORNO, presenting classical and contemporary works for horn, including pieces that are dedicated to him. As Orchestra conductor, Mikulski holds a vast repertoire, from baroque to the contemporary period, with an exceptional attentiveness for monumental oratorio - cantata and opera. Therefore, in addition to symphonic music by the great composers such as Beethoven, Brahms, Mahler and Richard Strauss.

His repertoire includes opera works such as "The Barber of Seville", "William Tell", "Wedding Filgare", "Don Giovanni", "Cosi Fan Tutte", "La Clemenza di Titto", "The Magic Flute", "La Traviata" and "Tosca". In May of 2015 he was the conductor and music director of the world premiere in Athens of the Greek opera „El Greco“, by George Hatzinasios.

Along with his artistic activity, Mikulski’s main concern is always the contribution to the cultural and musical education of the young generation. His professional activity also reflects on teaching, based on a profound musical education in Poland (Music Academy of Lodz- graduated with honors, PhD in 2002), Germany (Music Academy of Stuttgart) and Austria (Mozarteum), as well as on extensive stage experience.

Dariusz Mikulski is an associate Professor at the Music Academy of Łódz, where he has been teaching French horn since 2006 and as an acclaimed and esteemed lecturer, he is invited in many International Music Workshops and also conducts French horn masterclasses in Music Academies around the world.

He is the founder and conductor of the “Great Philharmonic of Poland” Symphony Orchestra. With more than thirty international concert tours (i.e. Poland, Germany, Austria, France, Sweden and Italy), young musicians from several countries have the unique opportunity to work and perform side by side with some of the best professional musicians, who are generously offering their knowledge and experience.

Dariusz Mikulski has been honoured by the Polish Ministry of Culture and National Heritage, as  one of the youngest artists in the history of Polish culture, receiving the “Gloria Artis” medal, for his artistic activity (2008). In 2011 he was also awarded with the Silver Medal of the City of Berlin, for his cultural contribution. Moreover he was awarded by marshall of Lower Silesian Voivodeship for special services in culture.

Dariusz Mikulski is the founder and CEO of ‘CONCORNO Cultural Management’. The company is based in Berlin, specialising in international concerts and artists’ management, with a rich worldwide activity in solo and chamber music concerts, as well as symphony orchestra concerts and Opera productions.